Plantain has Healing effect on the Digestive System.

You’ve stepped on it, ignored it, and tried to eradicate it from your lawn. However, this innocuous little weed is one of the most useful medicines on the planet, just begging to be harvested. Plantain has often been the go-to remedy for hikers plagued by mosquitos. Because it draws toxins from the body with its astringent nature, plantain may be crushed (or chewed) and placed as a poultice directly over the site of bee stings, bug bites, acne, slivers, glass splinters, or rashes. Bandage the area and allow the plantain to work its magic for 4-12 hours. Plantain may also be used to create a balm for emergency kits, or an infusion used as a skin or general wash. It is also a notable, soothing remedy for hemorrhoids.

There are two major types of plantain in BC, Canada: Lance and Broadleaf. Generally, all 200-plus varieties of plantain yield the same results. It grows especially well in poor, rocky soil (such as driveways) and is often seen alongside dandelion. More often than not, you will see plantain growing in gravel pits and construction sites as nature seeks to regenerate the soil. Introduced to North America in the 1600s, it was once called “White Man’s Foot” by the Native Americans who witnessed that where the Europeans tread and disrupted the soil, plantain sprung up. 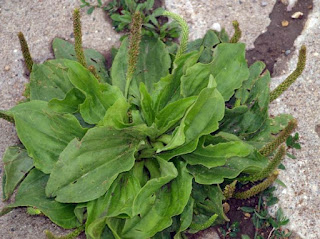 Plantain is renowned for its healing effect on the digestive system. This is especially useful for anyone who has been damaged by antibiotics, anti-inflammatory or pain medications, food allergies, or Celiac disease. Both leaves and seeds specifically target the digestive system for healing. The leaves may be steeped as tea, added to soups, or dried with a sauce similar to kale chips. The seeds – a type of psyllium – can be ground or soaked for bulk mucilage or absorbable fibre, which, consumed before meals, may help with weight loss.

Because plantain is a gentle expectorant and high in silica, an infusion can be helpful for lung problems, coughs, and colds.
Plantain is almost a panacea for the human body, treating everything from all menstrual difficulties, all digestive issues, to nearly all skin complaints, and even arthritis. Add to salads, chew to ease thirst, or enjoy in stir fries. This versatile wild vegetable will keep you in good health for years to come!
Posted by Liliana Usvat at 5:51 AM

Email ThisBlogThis!Share to TwitterShare to FacebookShare to Pinterest
Labels: and colds., Plantain has Healing effect on the Digestive System. remedy for hemorrhoids.coughs